Replacing an Epson 9800 or 9880 head can be accomplished fairly easily. For a replacement head, call our order department. 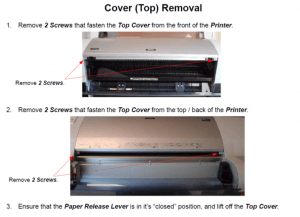 Move the carriage out to the middle of the printer by pressing on the cutter mechanism to release it. Then place an 8 1/2 by 11 inch sheet of paper underneath to catch any screws that may fall. 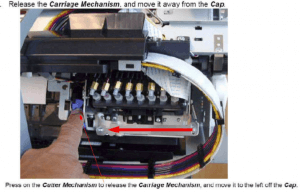 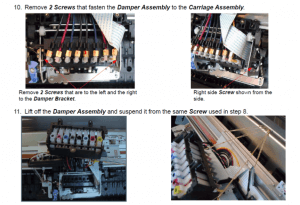 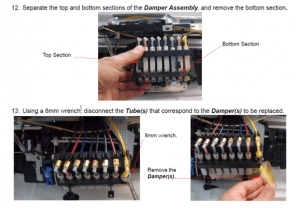 Next, inspect the O-rings on the ink tube fittings and replace if necessary. The 7800 and 9800 printers use a pressurized ink system, which makes a bad seal a big problem.

Inspect the new damper for any leaks before installing. See the diagram below for instructions on how to blow through both ends to find leaks. 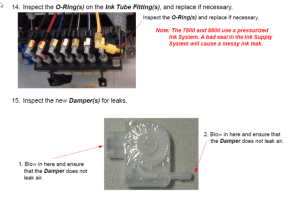 Firmly hold the ink supply fittings deep in the damper and tighten them back up with your wrench. Be careful not to over tighten and damage the O-ring.

Now reconnect the top and bottom sections of the damper assembly at the hinge points. 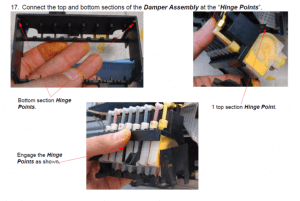 The dampers now need to be lined up evenly and in the proper position. Maneuver them until they fit uniformly in the guides provided by the top and bottom sections of the damper assembly. Each damper slot should engage with the assembly’s guides. When each damper is in position, the top and bottom sections of the assembly will come together. Fasten these back together with the two screws removed earlier.

Now that the dampers are replaced or checked, it’s time to take out the head. You’ll need a Phillips screw driver. Remove the screw from the metal tension bar on the left first. With the tension bar removed, you can remove the spring and the print head ground strap screw. Support the bracket so that it does not bend. 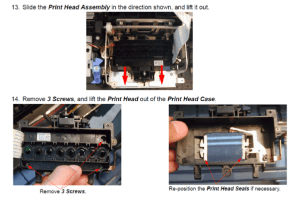 Plug the print head cables back into the new print head. Verify that each cable is fully and evenly inserted by comparing the blue part of the cable against the edge of the connector.

Finally, Ensure that the head assembly interlock tabs are inserted into the carriage assembly slots. Then go ahead and put things back the way you found them.