Epson printers are well-designed and have been proven to be the leading printers for photography, display, and fine art. They are low cost compared to professional printers made by Mimaki, Mutoh, and Roland, and have led the field in pigment inks. Their progress in technology has been valuable for the advancement of digital printing.

However, Epson printers need to be maintained, just like the professional printers. We have prepared guides to help you maintain and repair your Epson printers.

In order to replace the dampers or head, you need to remove the covers. Unplug your printer and follow along.

If you just need to replace the wiper or clean the capping station, skip to Locating the Capping Station.

By removing the following screws, you will be able to safely remove the printer side and top covers. You should remove both sides of the printer. Be careful to remove the control panel. Remove the screws first. Look over the entire guide to get an overall understanding of what is involved. The whole process should take about 20 minutes. 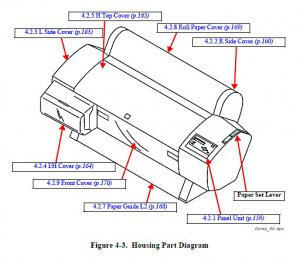 In order to remove the right side, the control panel must be removed from the right side cover. To accomplish this, you must press the two sides of the panel to unclip it. Be careful, because under the panel is a cable that is connected to the panel and the control board. Once you remove the sides and cover panel, you may want to reconnect the panel control and tape it to the frame for testing once you finish repairing your printer. 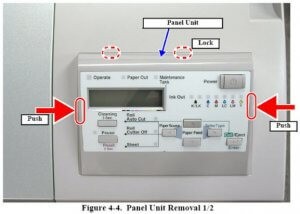 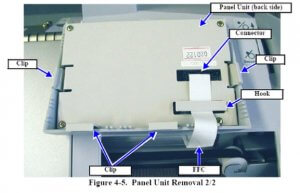 Remove the screws as shown on the lever and then remove the lever.

Remove the lever blind cap in order to slip the entire side off. After all the screws are removed, you will have to move the under lever to the blind opening. 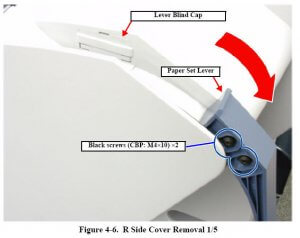 Continue to remove the following screws. 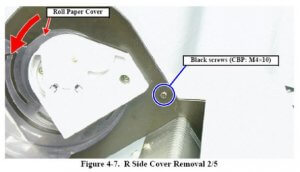 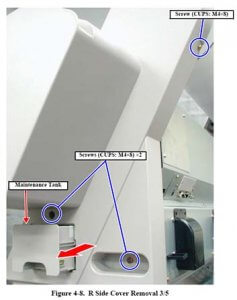 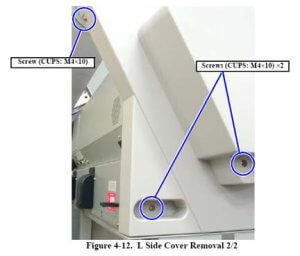 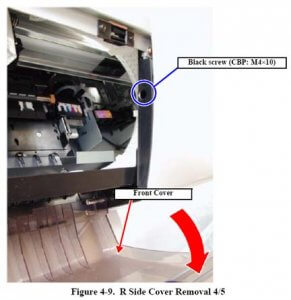 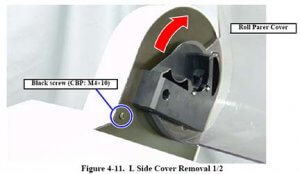 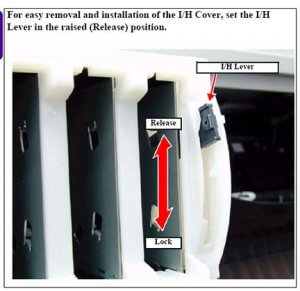 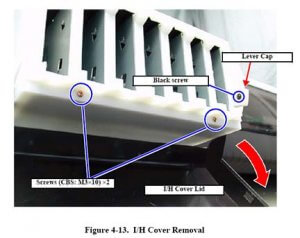 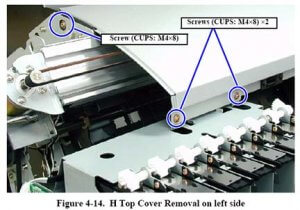 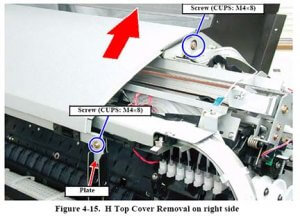 This diagram shows an overview of the inside of the 7600/9600 printer. In order to get access to the inside of the printer, you’ll have to remove the covers. The capping station is where you’ll place droplets of CLF007. 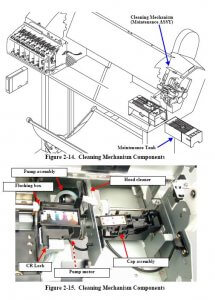 This is what it looks like when in use. By applying cleaning fluid to the pad frequently, it will remain free of ink build-up. 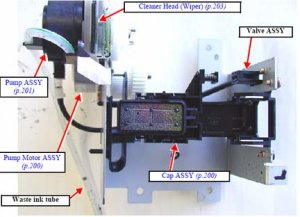 To the left of the capping station is the flushing box. The pad will become saturated over time. The printer head passes over this pad to spray all the nozzles every so many passes in order to prevent the nozzles from drying. It is important to make sure that the pad does not protrude upward. 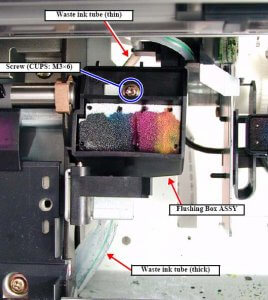 Note how the wiper is held in place. In order to replace the wiper, you will need needle nose pliers or a pair of tweezers. Grab the bottom of the wiper and pull down and away from the clips, then pull straight up and out. You do not need to remove the covers, but you need to be careful. 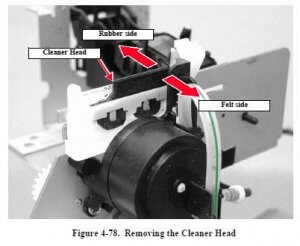 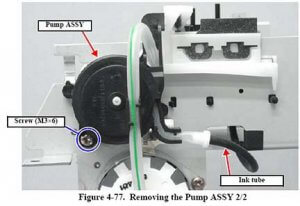 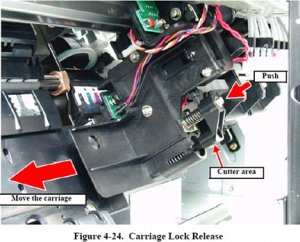 At this point, you should have the printer cover removed and have complete access to the carriage. Move the carriage to the center of the printer and make sure you have paper under the carriage head. Place paper towels around your working area, as ink will drip at some point.

With the carriage placed in the middle of the printer, remove the screw as shown. You will need a Phillips head screw driver. Place a finger under the carriage and feel the screw. Then place the screw driver straight down until you feel it catch the head. Gently unscrew. On some printers, the screw will only release rather than be completely removed. 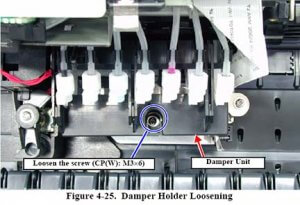 Remove the dampers by pulling them up and over to you. Do not touch the lever on the right. If you plan to replace dampers, you must unclip the hooks as shown below. You may want to check each damper while you have the unit apart. To remove a damper, you need to unscrew the white nut. Be careful not to loose the o-ring under the nut. I suggest you replace each damper one at a time so as not to mix up the order. 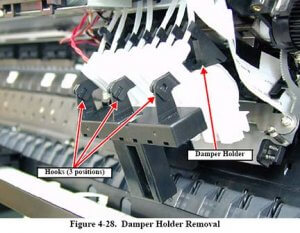 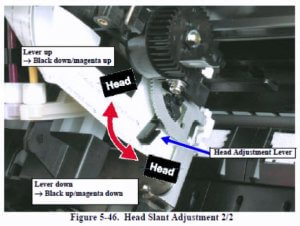 Note the round silver disc in the damper where the two red arrows are pointing. This is the filter and the one-way valve that prevents ink from backing up from the capping station into the damper. If it isn’t clean, it will not let ink through to the head. 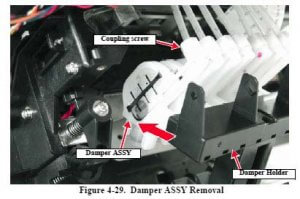 To Remove the Head

Before removing the head, make sure the dampers are placed out of the way. You may want to string them up with a rubber band.

When removing the head, loosen the screws as shown below and drop the metal blade out of the way. Pull the head out and remove the two ribbon cables. Handle the heads carefully. Do not put pressure on the bottom of the head. 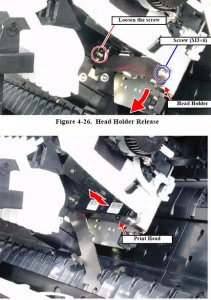 When removing the head, pull the ribbon cable off of the head smoothly. Make sure you do not bend the contacts. 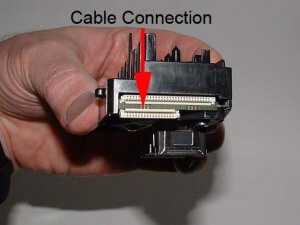 Note there are two sets of ink waste reset codes. Use the appropriate one for the type of ink you are using. 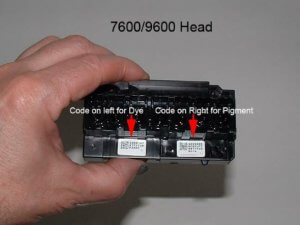